14 sources cited
NewMouth is reader supported. We may earn a commission if you purchase something using one of our links. Advertising Disclosure.

The gums are pink tissue lining your upper and lower jaws. They help hold your teeth in place.

Through poor oral hygiene, the gums can become infected by bacteria. This can lead to inflammation, swelling, and bleeding.

Swollen gums are larger than usual and often appear red. They may bleed when you brush or floss.

Gum inflammation is painful and can be a warning sign of gum disease. Diseased gums can lead to tooth decay and tooth loss (if left untreated).

There are other triggers of swollen gums besides gum disease. If you have been experiencing swollen gums for more than a few days, you should see a dental professional to find out the cause.

Here are the main causes of swollen gums:

The most common cause of swollen gums is gum disease, of which there are two main types: gingivitis and periodontitis.

Symptoms of gum disease include:

Gingivitis will cause your gums to become inflamed and sensitive. It’s caused by a bacterial infection that occurs through the buildup of plaque, a sticky film that forms on teeth after eating.

Bacteria in plaque feed on the sugars and starches on and between your teeth.

Left untreated, gingivitis can progress to periodontitis, also known as periodontal disease. This disease can cause the gums to recede, damaging the bones and tissues holding the teeth in place.

Besides damaged bones and loose teeth, bleeding after brushing and pus are common symptoms of periodontitis.

Other risk factors for periodontitis include smoking, certain drugs, a weakened immune system, and obesity.

Diabetes is also a risk factor for periodontitis. There are three reasons for this:

Radiation treatment for cancer can also cause inflamed gums. The technical term for this is oral mucositis — commonly known as “chemo-mouth.”

Inflammation and sores can occur as a side effect of chemotherapy, usually in the first 5 to 10 days following treatment.

Tobacco is bad for your gums. Smokers have double the risk for gum disease compared to non-smokers.4

This is for two reasons:

Smokeless tobacco can also raise your risk for gum problems, including periodontitis.9

Women are at higher risk for gum infections due to hormonal changes that occur throughout their lives. The two main hormones linked to gum inflammation are estrogen and progesterone.

There are four major life stages where hormonal changes occur:

These events all cause blood flow to increase to the gums. This makes them  more red, tender, and inflamed.

The use of oral contraceptives also causes hormonal changes, which can affect the gums.

Canker sores are painful ulcers that can form on the inside of the mouth, including the gums.

The cause of canker sores is often unknown. Some risk factors include a weak immune system, hormonal changes, and dietary issues.

Canker sores are not contagious.

A tooth abscess is a collection of pus that forms inside the tooth from a bacterial infection. The gums surrounding this tooth will often appear swollen.

An abscess is often painful and can be severe.

Certain medications are known to cause gingival overgrowth and swollen gums.

If a person takes a medication for blood pressure control (like calcium channel blockers or seizure medication), they may experience gum swelling.

Others medicines commonly known to cause swollen gums include:

Some other oral infections that can lead to gum swelling include:

What Causes Gum Swelling Around One Tooth?

There are a variety of things that can cause the gum to swell around one tooth. The most common reasons are a tooth abscess, gum disease, and poor oral hygiene. There may also be trapped food particles around the tooth.

It is also possible that brushing or flossing too forcefully may be the cause. A more gentle brushing technique can solve this.

When to See a Dentist for Swollen Gums

Gum swelling usually goes away within two weeks. If it doesn’t, you should consult your dentist.

Swollen gums can be a sign of gingivitis or other gum health issues. While this may go away on its own, if it lasts more than a few days, seek the advice of a professional.

A variety of treatments exist for swollen gums. Here are some home remedies to try:

If your gums have been swollen for over two weeks, it is time to see your dentist. The dentist will start by asking questions about when the symptoms began.

Then, they may order an x-ray and blood tests to check for further infection. After that, they will likely prescribe oral rinses or a special kind of toothpaste.

Professional teeth cleanings are necessary if tartar has formed.

Tartar is a hard substance that forms when plaque is not removed. It collects along your gum line and can lead to cavities and gum disease. It cannot be removed at home with a standard toothbrush.

If the gums are seriously infected, treatment by a gum specialist called a periodontist may be necessary.

How to Prevent Swollen, Red, and Bleeding Gums

There are several ways to prevent gum infections. The most important is basic oral hygiene. Brushing and flossing are essential to promote good dental health.

Plaque forms not only on but also between teeth in hard-to-reach gaps. This is called interproximal plaque. This is difficult to remove through brushing alone. If untreated, plaque-causing bacteria will spread to the gums below.

To remove interproximal plaque, floss regularly. You can also use interdental brushes, which have tree-shaped bristled heads specially designed to remove plaque.

You should also avoid tobacco products, including chewing tobacco. 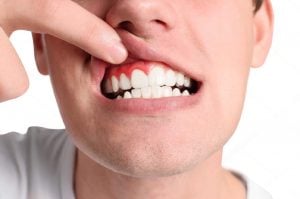 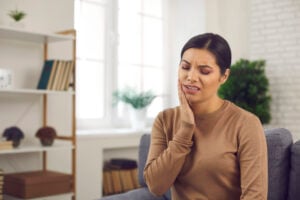 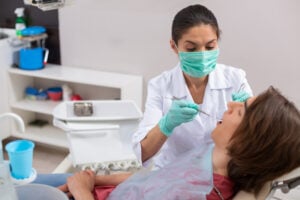 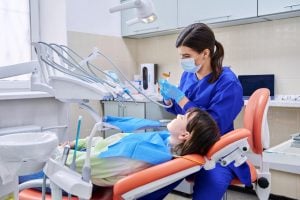 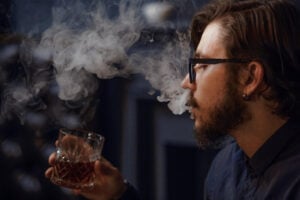 14 Sources Cited
Last updated on December 30, 2022
All NewMouth content is medically reviewed and fact-checked by a licensed dentist or orthodontist to ensure the information is factual, current, and relevant.