The term micrognathia or micrognathism, from its Greek derivation, refers to “small jaw.” It refers to a condition where the lower jaw (mandible) is abnormally small.

Micrognathia is usually something a child is born with. Trouble breathing or feeding and malocclusion (poor teeth alignment) are common complications. Some cases improve or completely resolve with time as the child grows up.

Note: Technically, a small upper jaw (maxilla) can also be referred to as (maxillary) micrognathia.1 However, this article focuses on the lower jaw.

Micrognathia is usually congenital, or present at birth. It can sometimes develop after a baby is born due to trauma or infection affecting the jaw joint.1

PRS is known as a sequence because these issues seem to develop in a particular order, starting with micrognathia:

One study found that about 40% of patients had PRS alone, with the other 60% had syndromic PRS, meaning they had other conditions associated with PRS.4

The most common syndrome associated with PRS is Stickler syndrome.2, 5 This condition affects the collagen in connective tissues. Stickler syndrome can lead to abnormal facial features, vision and hearing problems, and extreme joint mobility.

Micrognathia can also be found in Treacher Collins syndrome, which affects the cheekbones, jaw, ears, and eyelids.2, 3, 6 Hemifacial microsomia is a similar congenital condition that affects only one side of the face.7

DiGeorge syndrome can cause micrognathia in addition to heart defects, immune deficiency, and other problems.2, 3

Multiple syndromes have been associated with micrognathia.2

Besides the visible appearance of the jaw (including a small or recessed chin), babies with micrognathia can have other symptoms, including:

Tongue retraction and a cleft palate are also associated with micrognathia as part of the Pierre Robin sequence. If micrognathia or PRS occurs as part of a syndrome, other symptoms may be present, such as other abnormal facial features or skeletal, muscular, or organ issues.

A recessed chin can also be caused by retrognathia, where the lower jaw is of normal size but is further back than usual.7

How is Micrognathia Treated?

Treatment for micrognathia varies depending on severity and the presence or absence of an underlying syndrome. It can include surgery in severe cases.

Micrognathia can often be treated without surgery. This is especially likely if it occurs on its own and not as part of a syndrome.2

Non-surgical treatment focuses on managing breathing problems. For example, babies may be kept on their stomach or side to let gravity pull the tongue forward and improve airflow.2

Surgery may be required in more severe cases of micrognathia. For example, syndromic PRS is much more likely to require surgery than isolated PRS.2

Tongue-lip adhesion involves suturing the tongue to attach it to the inner lower lip. This prevents the tongue from falling back and making breathing difficult.

As the least invasive surgical option for micrognathia, it can be a temporary intervention in cases where the lower jaw catches up in growth over time.

Mandibular distraction osteogenesis lengthens the lower jaw by breaking the bone at specific points and allowing new tissue to grow as it heals.

Tracheostomy creates an opening in the windpipe and front of the neck to allow breathing without using the nose or mouth. This is more likely to be performed in cases where the airway is obstructed in multiple places, since it more or less guarantees proper airflow.2

All of these surgeries come with potential complications, including infection and damage to surrounding tissues.

The best time to buy new water flossers, electric toothbrushes, and tons of other dental products is now.

The long-term outlook for babies with micrognathia depends on the underlying cause and accompanying issues.

In many cases of micrognathia, the mandible may grow during childhood or puberty to catch up with the rest of the face. Feeding and breathing problems will eventually go away in these cases.2,

If micrognathia occurs as part of a syndrome such as Treacher Collins, it’s possible for the child to grow up healthy, perhaps with corrective surgery.2

Some syndromes that cause micrognathia, such as trisomy 18 (Edwards syndrome), have a poor long term prognosis, with most babies not surviving infancy.8

Micrognathia is a condition in which the lower jaw is smaller than normal. It may present on its own or be part of the Pierre Robin sequence (PRS), causing tongue displacement and breathing problems.

A wide range of syndromes are associated with PRS, though it can also occur on its own. Depending on the cause, micrognathia can be treated with or without surgery, and in some cases it resolves itself over time. 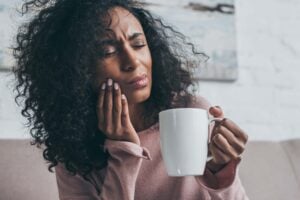 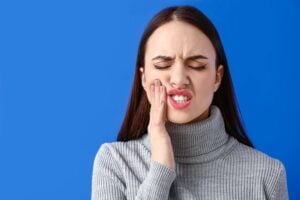 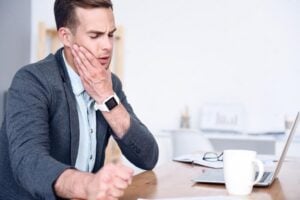 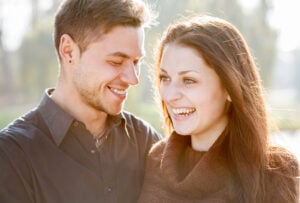 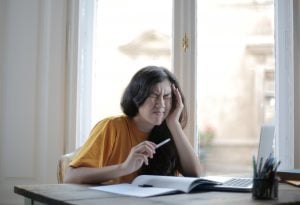 8 Sources Cited
Last updated on October 3, 2022
All NewMouth content is medically reviewed and fact-checked by a licensed dentist or orthodontist to ensure the information is factual, current, and relevant.