What are Teeth Whitening Swabs?

Regular teeth whitening gels are usually thick, which makes it harder for the product to penetrate the teeth’s enamel. This is why manufacturers typically instruct people to leave the product on for a long time.

Swabs have a thinner consistency than other bleaching gels found in at-home treatments. They also create a thin layer of active chemicals on the natural teeth so that people can safely leave them on after application.

Manufacturers instruct people to swab their teeth with a provided applicator. This applicator is designed to help people apply whitening gel on hard-to-reach areas of their teeth.

Like other whitening treatments, swabs contain hydrogen or carbamide peroxide. Both can lift stains from the tooth enamel. The concentration of these bleaching agents depends on the teeth whitening company’s formulation.

At-home treatments will always contain less concentrations of bleaching agents than in-office treatments. It’s normal for a product to have a 3 to 10% concentration of hydrogen peroxide or carbamide peroxide.

According to Dr. Nandita Lilly, one of NewMouth’s in-house dentists, “whitening your teeth is the quickest, safest, and most affordable way to transform your smile.”

How Do Teeth Whitening Swabs Work?

All at-home teeth whitening products have a similar process. Tooth whitening describes the treatment’s effect on the natural teeth. The actual process can be more accurately described as a bleaching process.

The success of a product’s bleaching process depends on the type of stain the teeth have. The three types of stains are extrinsic, intrinsic, and internalized discoloration.

Swabs work by causing a chemical reaction in the teeth to oxidize intrinsic stains and internalized discoloration. This creates a teeth whitening system that removes stains.

Intrinsic stains occur when there’s a structural change in the composition of the dental tissue. These changes are caused by several factors, including:

Extrinsic stains occur when chromogen compounds stick to the surface of natural teeth. Chromogens cause discoloration by reducing the enamel’s natural white coloring. They can also attach to the tooth directly or indirectly.

Direct stains usually come from chromogens that give different foods their natural color. They can also come from other substances like:

Indirect stains result from colorless compounds having a chemical reaction with elements on the tooth’s surface. These can come from substances like:

Internalized discoloration is caused by extrinsic stains entering the dentin, the hard tissue beneath the enamel. These stains usually enter the area through defects, like cracks or holes on the tooth’s surface.

Different areas of the stain can respond differently to whitening agents. This impacts the effectiveness of chemical whiteners, like teeth whitening swabs.

Pros of teeth whitening swabs include:

Cons of teeth whitening swabs include:

Studies show that at-home products can whiten teeth, but the bleaching process carries risks that could compromise a person’s dental health. Talk to a dentist about these risks.

There are several teeth whitening products available, including alternatives to whitening  swabs. Some alternative treatment options are:

Professional whitening is often the best choice for people who want whiter teeth. A dentist can discuss the different in-office treatment options available and customize them according to a person’s individual needs.

Dentists often use peroxide gel with higher whitening agent concentrations than at-home treatments. It’s common for these gels to contain 15 to 38% peroxide concentrations.

Dentists can monitor the bleaching process and ensure none of the gel gets on the mouth’s soft tissue and gums. This prevents the risk of developing gingivae discoloration or irritation.

Some non-invasive teeth whitening treatments a dentist can perform are:

Whitening strips are one of the most popular at-home teeth whitening treatments. They usually contain hydrogen peroxide in 5 to 14% concentrations, which are released slowly between 5 to 60 minutes.

Studies show that whitening strips can be more effective in the 5 to 6.5% concentration range. The treatment is also more effective when the natural teeth are exposed to whitening agents for a longer period.

The light affects the dentine and enamel’s yellow pigment. It destabilizes and breaks carbon double bonds present in the pigment’s compounds. This makes the molecules smaller and more reactive with the peroxide.

Violet LED light is beneficial when used in concentrations no greater than 17.5%. However, it can make the front teeth sensitive.

Whitening toothpaste is effective for extrinsic stains. It doesn’t bleach the tooth or change the actual color. Instead, it removes physical stains using abrasive components.

It’s the most common at-home whitening treatment. It also contains low amounts of peroxide. Other components whitening toothpaste can contain include:

Some toothpastes also contain blue covarine as a whitening agent. It’s a pigment that remains on the tooth’s surface. Researchers believe it can shift the color yellow to blue, creating a tooth-whitening illusion.

Blue covarine doesn’t remove stains or break down pigments. It only adds a layer of pigment to create the effect of teeth whitening.

Whitening mouthwash isn’t as effective as other at-home whitening treatments. This is because the teeth aren’t exposed to the whitening agents for a long time. However, the product can have a visible effect after continued use.

Teeth whitening trays and gels commonly contain either hydrogen peroxide or carbamide peroxide. The latter releases 50% of its peroxide in the first 2 to 4 hours. The rest is released over the next 6 hours.

This product is an effective at-home teeth whitening treatment, whether it’s done in-office or at home. However, getting this treatment at the dentist can ensure the trays are customized to precisely fit a person’s teeth. These custom trays ensure a proper fit and lessen the chance of gum irritation.

Whitening trays and gels are more effective when used 3 times a day. This increases the teeth’s exposure to the whitening agents. Some manufacturers instruct people to use their product two times a day for 30 minutes to 2 hours or overnight every night for 2 to 6 weeks.

How Much Do Teeth Whitening Swabs Cost?

Swabs can cost anywhere from $50 to over $100. Some companies sell their products in packs to accommodate a week’s worth of use. The effectiveness of this product can depend on the frequency that it’s used.

Teeth whitening swabs are a type of at-home treatment. Companies market them as a fast-acting, leave-on product that’s easy to use and suitable for sensitive teeth.

The three types of stains are extrinsic, intrinsic, and internalized discoloration. These can affect the efficacy of a teeth whitening product.

Whitening toothpaste is suitable for extrinsic stains because they contain abrasive components like baking soda, papain, or sodium fluoride. Whitening swabs, strips, mouthwashes, gels, and trays are all suitable for treating intrinsic and internalized stains. 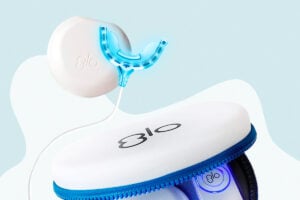 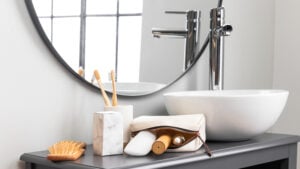 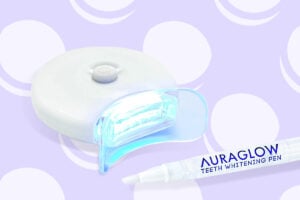 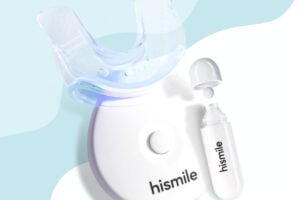 8 Sources Cited
Last updated on October 3, 2022
All NewMouth content is medically reviewed and fact-checked by a licensed dentist or orthodontist to ensure the information is factual, current, and relevant.

Veronika
Content Contributor
Veronika
Content Contributor
Veronika is a content writer for NewMouth. She has seven years of experience writing about different topics, including oral health. She believes in making medical and scientific knowledge more accessible to everyone. Her work at NewMouth aims to give people accurate, unbiased, and digestible information, to help them make informed decisions and improve their quality of life.