18 sources cited
NewMouth is reader supported. We may earn a commission if you purchase something using one of our links. Advertising Disclosure.

Bleeding gums are a common issue and aren't always due to serious underlying diseases. Many people experience occasional bleeding from the gums due to:

However, bleeding gums can have more concerning underlying causes. It’s a typical symptom of gingivitis (mild or early-stage gum disease).1

With good oral hygiene habits and simple, at-home remedies, you might be able to treat and prevent gum bleeding.

Many things can cause gums to bleed. Some demand more attention than others.

One common cause of minor gum bleeding is flossing, especially if you don’t floss regularly. Your gums might not be used to the light friction that flossing creates.

Bleeding gums can be a sign of gingivitis (mild gum disease) or periodontitis (advanced gum disease). Hemophilia and leukemia can also cause your gums to bleed.

Other causes of bleeding gums include:

Other Symptoms of Bleeding Gums

Depending on the cause, gum bleeding might occur along with other symptoms of inflammation, such as:1,2

Here are eight ways to prevent and reduce gum bleeding:

Minor gum bleeding is a common effect of flossing in people who don’t floss regularly. Your dentist may notice this when flossing your teeth during a routine cleaning.

By flossing regularly and using the proper technique, you can make bleeding less likely to occur.

Brushing your teeth too aggressively can also make your gums more likely to bleed. Brush gently, in soft circular motions, and make sure the toothbrush bristles aren’t too harsh on your teeth and gums.

Regular brushing and flossing will help prevent plaque buildup, which can lead to gum disease.

2. Apply Gauze or a Compress

Dampen a clean piece of gauze and gently hold it against your gums to stop the bleeding.

An antiseptic or anti-plaque mouthwash will help reduce the oral bacteria and plaque that contribute to gingivitis.3

Applying high-quality honey to your gums after brushing might help treat or prevent gingivitis.5, 6 Honey has antimicrobial effects, and Manuka honey in particular might be helpful in fighting oral bacteria.7

Propolis, also sometimes known as bee glue, is another bee product that may yield benefits for your teeth and gums. One study found a 2% propolis rinse to have similar effects on gingivitis when compared to typical mouthwash.8

Note: These products aren’t meant to replace regular brushing and flossing. You’ll maximize the benefits of remedies like these by combining them with good oral hygiene.

5. Use Dental Products with Turmeric (Curcumin)

Curcumin, the main active ingredient in turmeric, has been found to work as an anti-inflammatory and antimicrobial agent.9, 10

Studies evaluating gels and mouthwashes made with curcumin have found them to be similar to chlorhexidine mouthwash for preventing and treating gum disease.10, 11

You can apply a turmeric paste, whether store-bought or homemade, to your gums after brushing. This remedy shouldn’t replace regular oral hygiene practices.

Oil pulling with coconut oil might reduce oral bacteria that contribute to gum disease. Coconut oil contains the antimicrobial lauric acid, and has been studied as an oral hygiene supplement.12

Current research isn’t enough to confirm any benefits, and the American Dental Association (ADA) does not recommend oil pulling.13 But as a supplement to proper brushing and flossing, it may be worth trying.

Tobacco use is a risk factor for various oral health problems, including periodontal disease.14 By quitting smoking or otherwise using tobacco, you reduce your risk of developing inflamed or diseased gums.15

Certain dietary choices can improve your oral health and reduce your risk of gum disease.

One study found that a diet low in carbohydrates and high in omega-3 fatty acids, antioxidants, fiber, and vitamins C and D reduced gum inflammation over a period of 4 weeks.18

Your gums may benefit from including nutrient-rich foods in your diet and reducing your consumption of sugary and nutrient-poor foods.

When to See a Dentist for Bleeding Gums

While moderate, short-lived bleeding can be a common effect of flossing, your gums shouldn’t bleed regularly or excessively.

If your gums experience recurrent bouts of bleeding or show other signs of inflammation, visit your dentist. They can diagnose gum disease and recommend appropriate treatment.

If you’re in the early stages of gum disease, your dentist can help you prevent it from progressing to more advanced periodontitis.

A dental or periodontal abscess will not go away on its own. If you notice gum swelling or pus, this is another reason to see your dentist for prompt evaluation and treatment.

To diagnose the cause of your bleeding gums, your dentist will examine your mouth and look for signs of inflammation or pathology. They may take measurements and X-rays to assess the extent of damage or disease.

Your dentist will also review your medical history to determine whether any medications or habits (such as smoking) are contributing to your gum bleeding.

Gingivitis and less severe cases of periodontitis may be treated with a professional cleaning. The conventional deep cleaning procedure for gum disease is known as scaling and root planing.

Scaling removes buildup from your teeth and under your gums. Planing (smoothing) of the roots of your teeth will help prevent future tartar buildup. Both procedures will make routine dental care easier going forward.

Your dentist can also correct any problems you have with crowns or dentures, both of which can contribute to gum inflammation and sensitivity.

If you have an abscess or tooth decay in conjunction with gum disease, your dentist will address these issues as well. They might prescribe antibiotics to fight the bacteria affecting your gums.

If you have advanced periodontitis, you might require surgical treatment to restore or replace diseased gum tissue, as well as antibiotics.

Because frequent or prolonged gum bleeding is often a symptom of gum disease, leaving it untreated can lead to further complications.

A mild case of gum disease, if not managed properly, can progress to more advanced stages. It can cause preventable pain and inflammation.

Advanced gum disease can lead to bone and tooth loss. It can also cause bacteria to enter the bloodstream. This can harm other parts of your body.

Minor gum bleeding can often be managed at home. Proper oral hygiene, including regular brushing and flossing, can prevent it.

More intense cases of gum bleeding may not resolve on their own. Your dentist can provide proper treatment to alleviate painful symptoms.

With prompt attention from a dental professional, gum disease and other causes of gum bleeding is both manageable and treatable.

Minor gum bleeding is relatively common and may not indicate any serious problems. Bleeding gums can, however, be a symptom of gum disease.

You can take steps at home to prevent and reduce gum bleeding and gum disease. Used in conjunction with regular brushing and flossing, certain traditional and herbal remedies may be helpful.

If you’re suffering from frequent or profuse gum bleeding, or you have other symptoms of gum disease, make an appointment with your dentist. 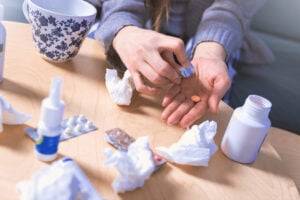 18 Sources Cited
Last updated on December 30, 2022
All NewMouth content is medically reviewed and fact-checked by a licensed dentist or orthodontist to ensure the information is factual, current, and relevant.